Winter entertaining season officially kicks off with Thanksgiving. For many people, the cozy nostalgia calls to mind all those vintage images from the mid century, with families gathering around tables laden with huge turkeys. There’s nothing wrong with today’s contemporary twists—sushi on the beach, anyone?—but if you want to have your own Mid Mod themed Thanksgiving, here are seven must-haves, all sourced from RubyLane.com.

Mid century turkey dinners might have tasted a bit different than what we’re used to now: home chefs roasted their turkeys for a very long time (like 9 hours) at low heat, and used less salt and other seasonings than today’s recipes call for. But no matter how it’s prepared, serve the turkey on a vintage platter that’s got enough heft to stand up to all that poultry goodness. Don’t forget the artistic garnishes: In the 1960s, Thanksgiving dinners involved rather fussy garnishes—picture oranges carved in half and topped with cherries. As for the little paper decorations on the roasted turkey’s legs, they are properly called “turkey frills.”

Don’t forget: Plop out that cranberry sauce, right from the can, and slice it—this trend started in 1941.

Mid century cookbooks are popular with fans of cooking, true, but also with those who love graphic design because they feature colorful illustrations and spritely graphics. But best of all? The nostalgic recipes that remind you of what grandma used to make, like a Jell-O mold. Then there are the more eyebrow-raising dishes. Lima Beans with Marshmallows? Hmm, maybe stick to a classic like Betty Crocker’s Pie and Pastry Cookbook, from 1968. Click to shop for vintage cookbooks.

According to the L.A. Times, “American-style casserole cooking reached its peak of popularity in the 1950s when food companies, whose marketing research allowed them to estimate the kitchen skills of their customers, promoted their products by offering recipes with simple instructions. These dishes were based on good old one-two-three-ingredient recipes that convenience food cooks could easily master.” Thanksgiving’s famous green bean casserole—served at 20 million tables every year, according to Campbell’s Soup Co., is a perfect example. It was developed in 1955, by Dorcas Reilly of Campbell’s Home Economics Dept., who first called it “Green Bean Bake.” Click to shop for vintage casserole dishes.

Pass the gravy! Some home cooks were still making gravy the old-fashioned way, but the mid century was the era of convenience foods, so dry-mix packets of gravy became au courant. In the 1950s, lumpy gravy was still a problem with the mixes—hence all the old jokes about mother-in-law’s cooking—but by the 1980s, food scientists had figured out how to avoid clumps by adding maltodextrin. A gravy boat and saucer is a modern classic, and not a bad investment as vintage ceramic designs still have great tabletop appeal. Click to shop for vintage gravy boats.

Old issues of House Beautiful give a sense of what mid century tabletops looked like, and nearly all the vintage photographs feature candlesticks as well as a large centerpiece—usually made from fruit or flowers. For a truly MCM look, use long white taper candles. Click to shop for vintage candlesticks.

After a big dinner of turkey and all the fixings, mid century families often went to the living room to play a board game. Adults enjoyed an after-dinner cocktail like a Brandy Alexander or a Grasshopper. Vintage barware with gold bands and regal motifs are very Baby Boomer-era and ideal for use during a mid century themed Thanksgiving gathering. Click to shop for vintage cocktail glasses. 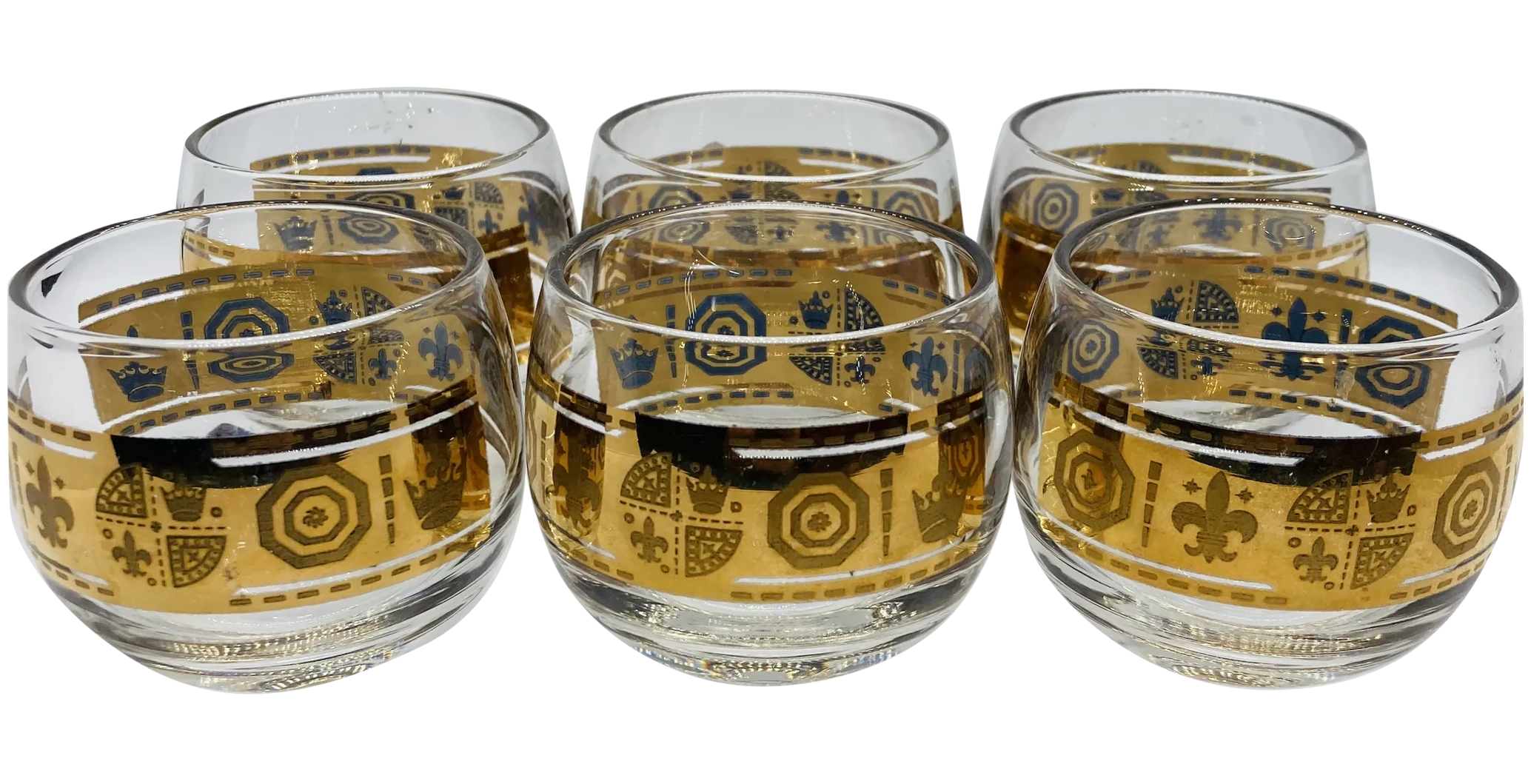 A vintage Culver set of roly-poly whiskey/cognac glasses, circa 1960s.

Back to all Articles